More people are catching on to the thrill of casting their lures into the region’s picturesque rivers and lakes amid the global pandemic.

With a growing number of Canadians seeking outdoor adventures close to home while facing travel restrictions during the COVID-19 pandemic the past 17 months, many are turning to the sport of fishing, says Canmore Fishing Adventures owner and guide Brad Murphy.

“During COVID-19, a lot of people were looking for outdoor activities and people took the opportunity to learn fly fishing so they could have another activity that they could do outside,” said Murphy. “We’ve got people from up north, Alberta, Saskatchewan and all the way up to the east coast.”

The lifelong fisherman learned the sport from his father, grandfather and older brothers while living in southern Ontario. 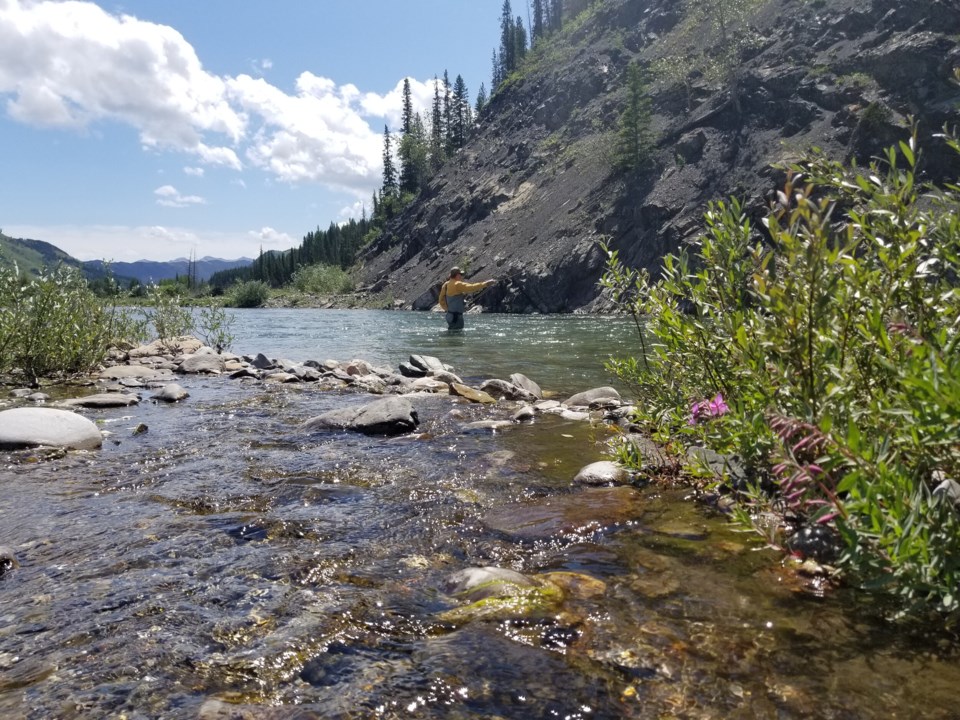 After moving to Canmore at the age of 20, Murphy turned his attention to mountain biking, but following a few injuries he picked up his rod again.

“I was a Shaw technician and I was getting sick of technology and staring at screens,” he said. “I guided for a friend in Banff and fell in love with the rivers. I fell back in love with fishing and hunting and all of those things that I did with my brothers.”

In 2019, Murphy left the corporate world and started his own guided fishing business with evening, half-day and full-day fishing for beginners to experienced anglers, both tourists and locals alike. 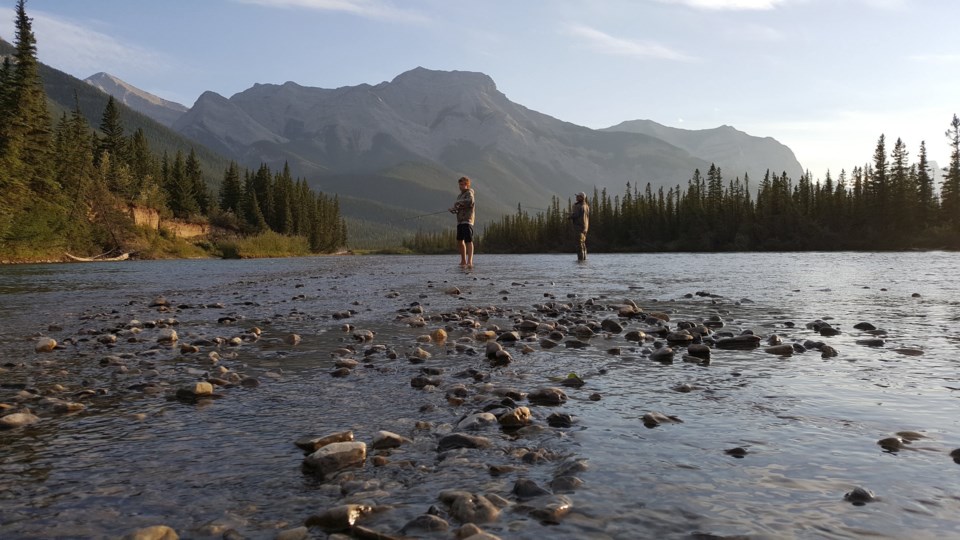 Scenes from a trip. By Brad Murphy

Canmore Fishing Adventures offers guided float, walk and wade trips on the upper and lower Bow River and surrounding lakes and streams, as well as lake trips and ice fishing at Spray Lakes in the Kananaskis.

During his first summer in business, 70 per cent of Murphy’s clientele were Americans.

“Canmore and Banff were experiencing some of their biggest numbers of visitors,” he said. “It was a good year to get started.”

Despite being faced with a pandemic in his second and third seasons, Murphy and his two fully-trained guides continued to see a demand in people wanting to fish. 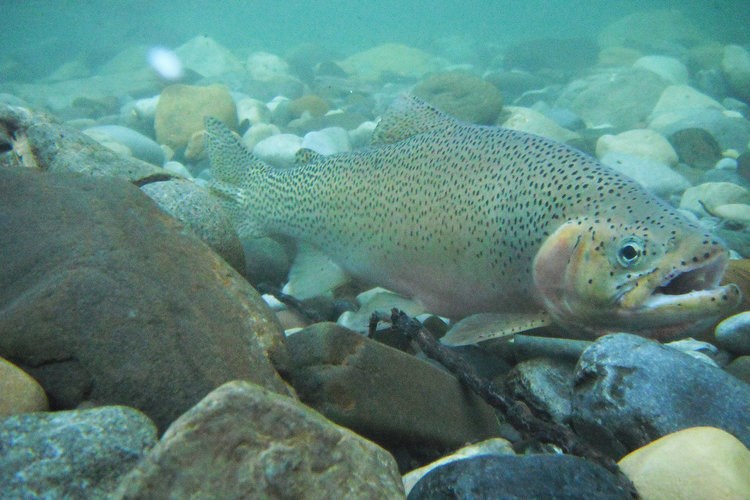 “The most popular trip is the upper Bow River trip,” he said. “It’s a five to six hour trip and they can be off the water by 2 p.m. and on to a local patio. We can cover a lot of water and they can see a lot of scenery and wildlife.”

“The lower Bow is world renowned as Blue Ribbon waters,” he said. “For a river to be classified as Blue Ribbon, there’s five thousand fish per mile or better. Here on the upper Bow it’s a little bit different. The fish up here are smaller than what you would catch in the lower Bow, but there’s good populations of them.”

Murphy said it’s important for him to get people out of the boat and into the water. 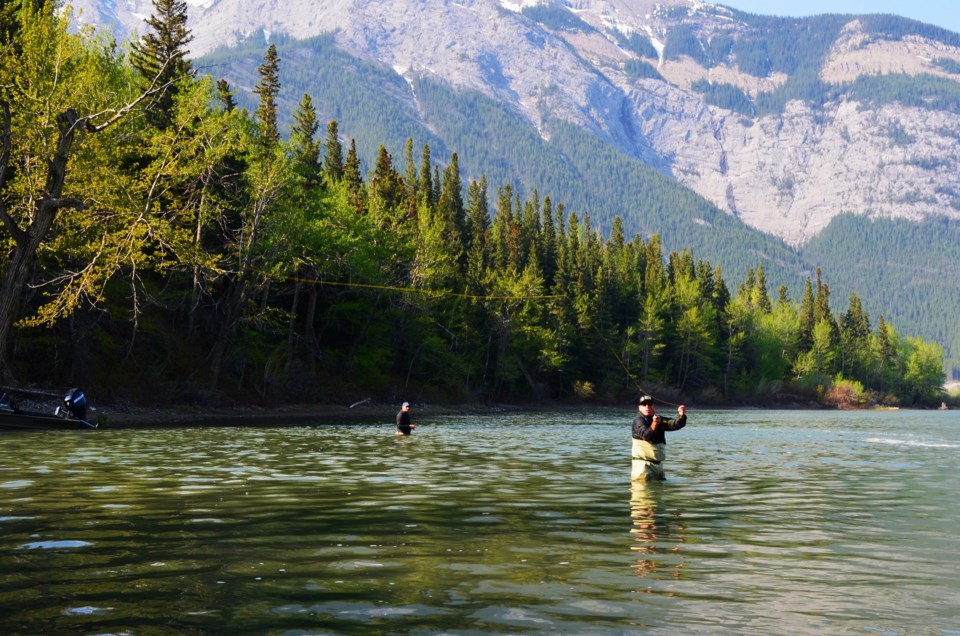 “Some outfitters keep them in the boat all day long, but we use the boats to access the really good spots,” he said. “When you stop and get out you can really fish it thoroughly. It increases your odds of catching fish. We always want to make sure everyone is successful in catching a fish.”

Those fishing the Bow are required to catch and release, but a trip to Spray Lakes means a potential meal with a limit of three lake trout per day, said Murphy.

“Sometimes we will cook it up in the ice hut and do a fish fry,” he said. “We have both permanent and portable shelters.”

The best part of the experience, according to Murphy, is when the fish tug on the line.

“We joke in the fishing community that ‘the tug is the drug,’” he said. “It’s an adrenalin rush when you feel that pull.”

Murphy admits that his first years as a fisherman were spent focused on catching the biggest and most fish, but that’s now changed.

“Now I want to go fishing for solitude,” he said. “It’s about being in nature. Just like anybody who likes hiking or skiing, it’s about getting connected to nature.”