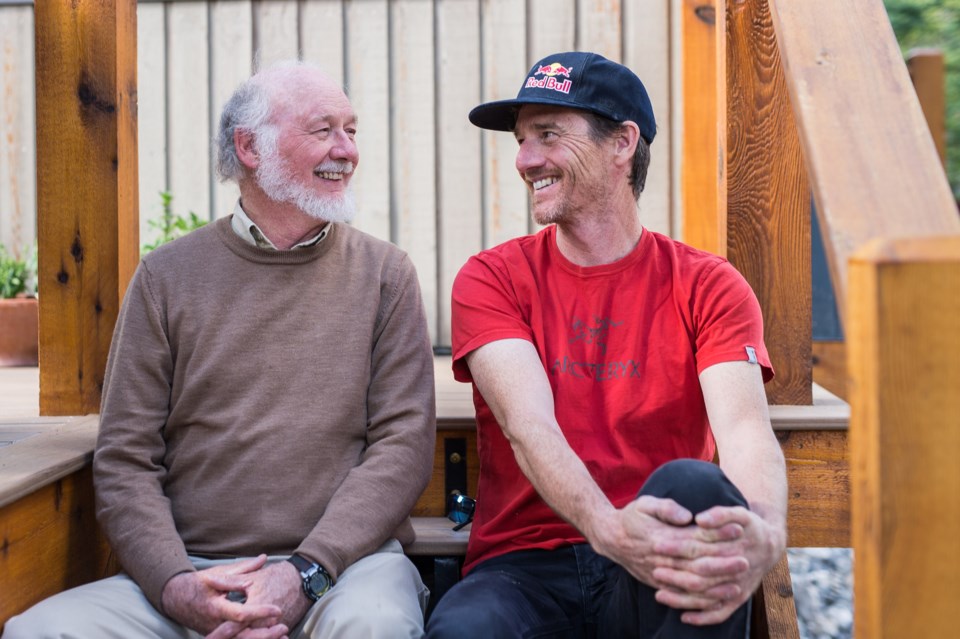 Ben and Will GaddRafal Andronowski
Will Gadd is the adventurer who was the first to ice climb Niagara Falls and has numerous other first ascents on rock, ice and mixed routes.
He has also broken the distance paragliding world-record three times and has paraglided across the United States. Along with these feats, he works hard to raise kick-ass kids.
“I’m a ‘modern dad’ in that I make lunches and changed diapers. But I also hold true to the idea that dad's should get dirty, bloody, swear, have fun, have wrecks, use tools, burn stuff, and do all of that with their kids. I’m also teaching my girls to get outside, bike, climb, ski, camp, hunt, and generally experience the reality of the outdoor life,” says Gadd. "My kids don’t watch TV or use iPads. They do stuff with us and on their own, just as kids have forever before they got velcroed to the couch in front of the TV.” 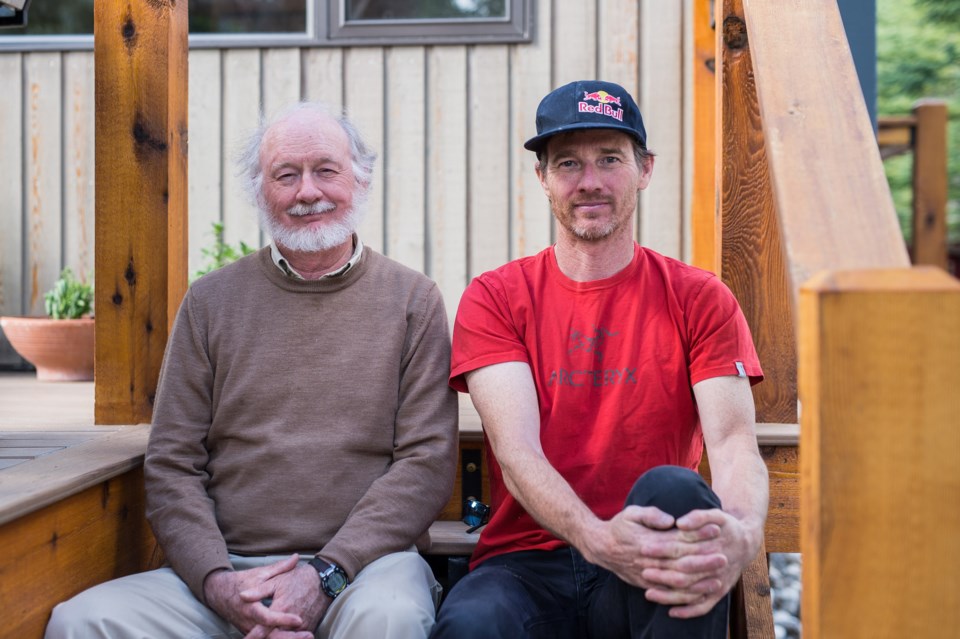 Ben and Will Gadd. By Rafal Andronowski
Will is just doing what he learned from his father, Ben Gadd, who is a respected geologist and author in the Bow Valley. He wrote the definitive natural handbook to the area, Handbook of the Canadian Rockies, while he raised Will.
So how did he raise such an adventurous son?
"My dad’s unrealistic expectations of life and its inhabitants drove me nuts as a kid, but enough of it wore off that I’ve lived a fairly unreasonable life myself. I hope the same for my kids.”
Here are some of the many life lessons Will picked up from his dad.

Many people spend a lot of money to have adventures downhill skiing or staying at a beach resort or something. They are going to rent a condo, eat at restaurants, and it’s all going to cost a lot of money for the weekend. Expensive comfort doesn’t add anything to adventure. In fact, if the thread-count is high, the adventure is usually low.

My dad’s approach was always, “Everybody get in the van” and off we went. We did a tremendous amount of recreation in the mountains with very little money or gear, because we didn’t have any. I think that is a really good lesson in life and recreation – adventure is fundamentally free. You don’t have to pay for the mountains. I don’t think the families that were spending thousands of dollars every weekend were having a better time than we did growing up. Money isn’t the barrier, you just gotta go and adventure will result.

Kids are way more durable that you think and are BETTER in the outdoors.

We spent hundreds of thousands of years living outside. That is our natural environment. What we think of is natural now is inside, but kids are naturally great outside. They are always happiest in recess. Why don’t we make recess longer? Naturally withdrawn kids find excitement on adventures, and the ADHD kids do way, way better, too. With my dad, he was never afraid to get outside with the kids and go on adventures of whatever kind. We should stop treating our kids like china. They, like us, evolved to be outside and are more durable and functional outside. 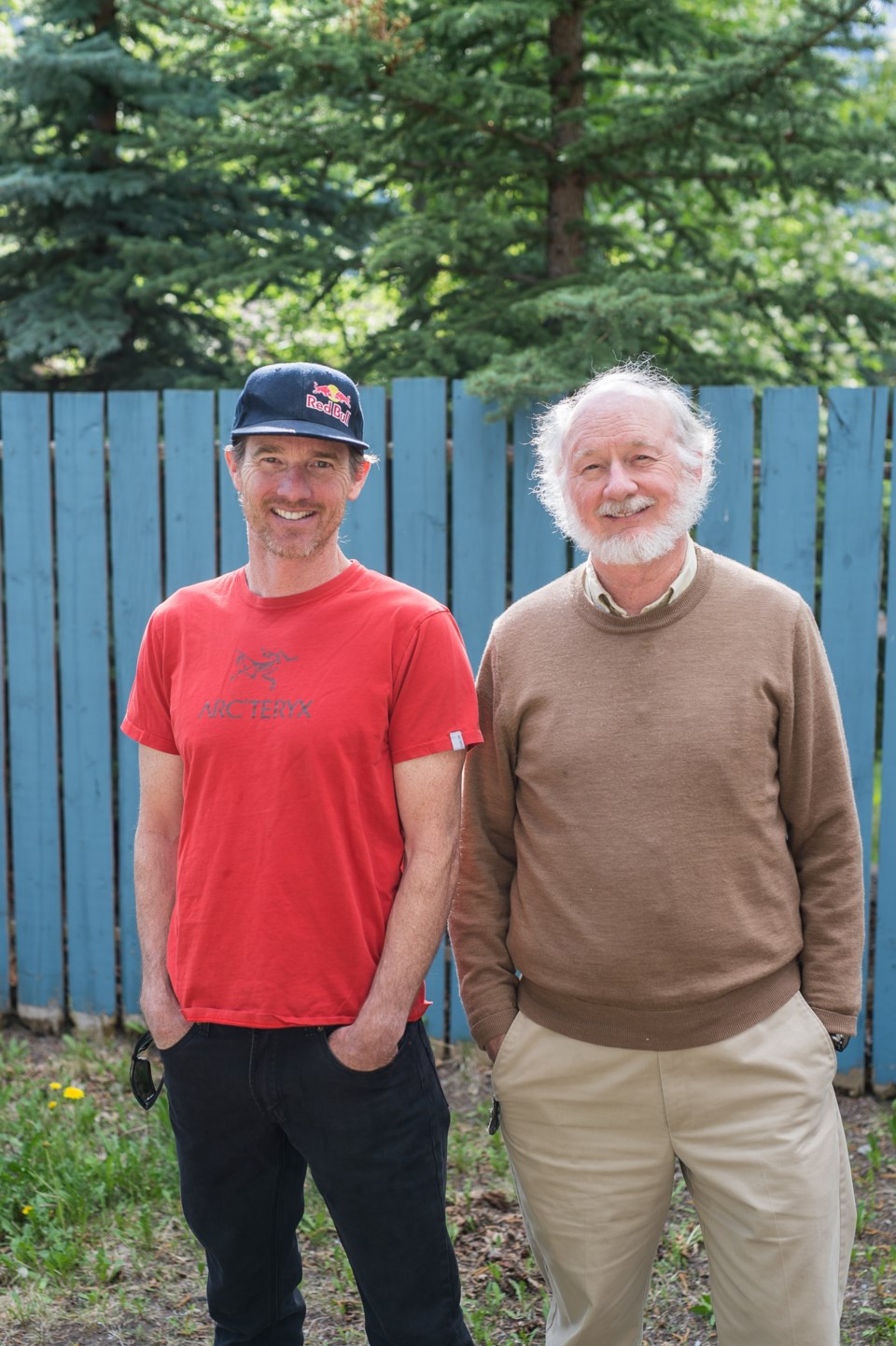 Will and Ben Gadd. By Rafal Andronowski

It is not a waste of time, it is a great use of time. I think that today kids and adults are so scripted to “programming” and “improvement” that adventure is very rare. But real adventures of any scale teach real values and understanding both of the world and yourself: you overcome things, figure situations out, learn, and grow as kid or adult.

Adventures are critical and important. It doesn’t always have to be mountain adventures, but just going places, trying new things out is an adventure – even in an urban environment. Sometimes, especially in an urban environment. Like taking the subway as a kid and figuring it out. Life is fairly meaningless without adventure. My dad was an inveterate adventurer, and so was my mom. It was a family activity.

The first goal is to come back, every single day.

Surviving is always the goal for adventures and in life. Life is important, and if an adventure goes too far it can kill you. I watched helicopters with body bags fly over my head when I was 10 years old in mountains. My dad chose to ski tour in a safer area, others didn’t. With that said, set your goal appropriate to the day, you don’t always have to go big, back down when the backing down is good.

Make sure you put your tent in a place that is well drained.

I still evaluate camp sites based on my dad’s lessons. “What is going to happen here if it rains” … I have been to so many places in the mountains, watching people make their tent and think, “oh, that is not going to work out” and then you see the lake around – and soon in – their tent. I had to get that wrong many times as a kid with my dad laughing at me, but today my camps stay dry.

Stand up for what you believe in.

Stand up for what you believe in, in life. My dad has spent his entire life doing this, and shaped some policies that make the world a better place. Many people have called my dad unreasonable, but as George Bernard Shaw said, “The reasonable man adapts himself to the world; the unreasonable one persists in trying to adapt the world to himself. Therefore all progress depends on the unreasonable man.”

The best expression of creativity is to lead the life that you want to live. Not what is easiest or take the path that is most lucrative. But a creative life to me means to create a life that you want live on your terms. That is not a path that is simple or easy. In my view, it is one of the most important things humans are capable of. You know, we don’t have to just chase nuts all summer long so we have enough for the winter. We are really lucky. We can do incredibly creative and beautiful things with our lives. But we have to have the courage to do that. I certainly learned that from my dad. To have an unscripted life.