Canmore's own Adam Campbell along with Greg Hill and Andrew McNab, crush the Rogers Pass to Bugaboos ski traverse in 53.3 hours.
Apr 27, 2021 4:29 PM By: Katharine Erwin
Previous Next
Walking up the IllyAndrew McNab
Expand
It is not unusual for adventure partners of the prolific pro skier/ACMG (Association Of Canadian Mountain Guides) ski guide Greg Hill, to receive a last minute call to do some righteous, rigorous journey.

In fact, it is very “on brand” for Hill. So when conditions lined up to try and set a new record for the 120-km (according to Hill's GPS) Rogers Pass to Bugaboos ski traverse – Andrew McNab and Adam Campbell weren't surprised – they simply accepted the challenge.

“It was something that I've been focusing on this year, but also just having some sort of bigger goal to do,” says Hill, who is always concocting something grand.

“Adam and I have always talked about doing something and I know he is good at digging deep. Andrew and I've always done lots of big days together and though we actually hadn't even skied together yet this year – which is pretty rare – he was psyched and was just an animal on the trip. It was awesome.”

McNab, for those you aren’t familiar with his name, is a Revelstoke ACMG ski guide, who recreates with some of the world’s top skiers, but isn’t technically a pro skier. 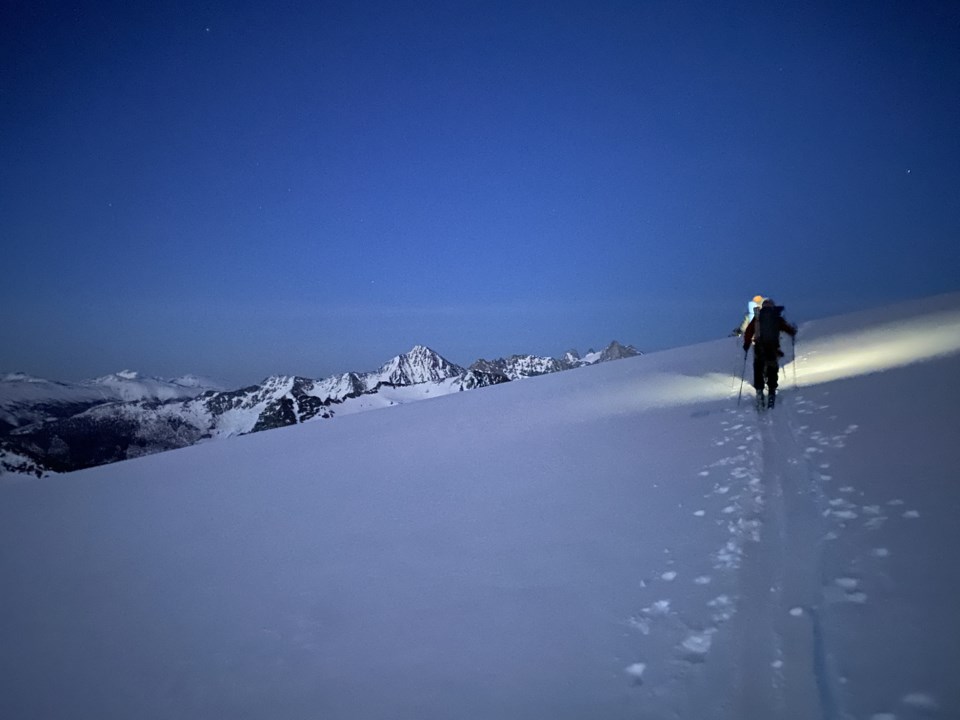 “Andrew, sort of the unsung hero is that he's, he's often along on all of these incredible missions and he gets overshadowed by other people's bigger names,” says Hill.  “But he's such a highly skilled individual on all fronts from fitness to the ability to climb and ski big wild descents. He's just this incredibly well-rounded athlete and absolutely modest.”

“I'm just the passionate ski bum that became a guide so I can hang out with my friends cause they all became guides,” jokes McNab. “For me it's been a wicked winter of being able to ski a lot for myself as well as work. I still had 60 days of work. But the idea of the traverse was definitely daunting and I was leery in the beginning about how much it was going to hurt and was it doable. But, Greg and I have been working towards this kind of thing for the last several years. We help push each other. Greg has been an inspiration to me for well over a decade, that's pretty cool to gain my strength and be able to be a strong team member. “

Campbell is also not a pro skier, but he is a pro endurance athlete who has once run continuously for 33 hours and has multiple 20 + hour days. He also dedicated his winter to ski touring, putting in over a 100 days. 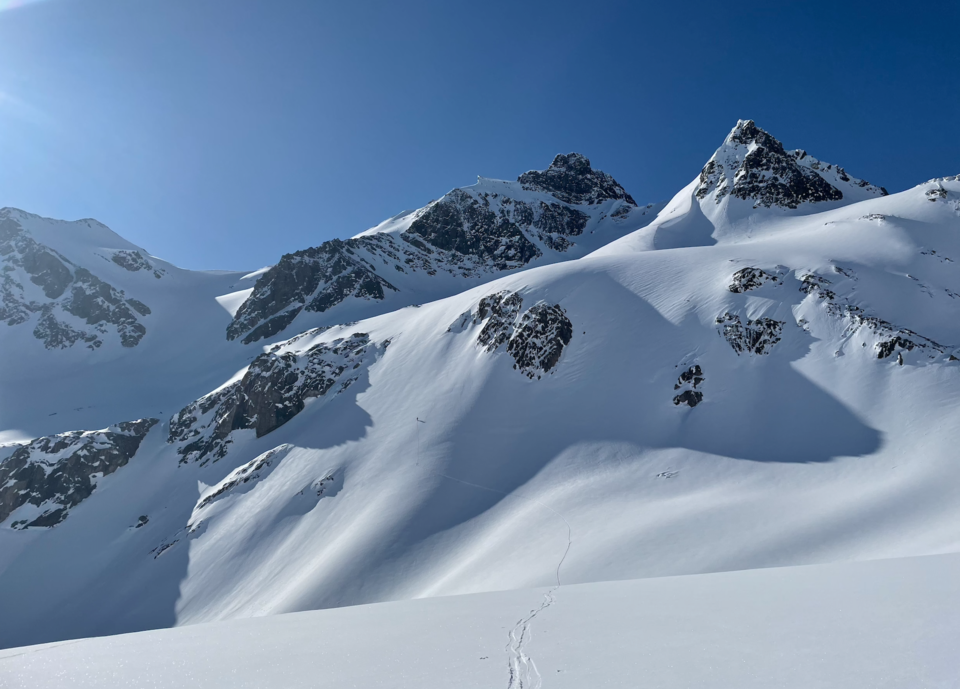 One of the many stunning views along the way. By Andrew McNab

“I was at my prime fitness when Greg called. I've never ski toured as much as I have this past year,” says Campbell. ”So it sort of all aligned. Despite looking long and hard for an excuse not to do it because I didn't want to hurt that much. I couldn't come up with a good one. Also, it was a huge honour for me to do this with these two legends of the sport.”

Typically the traverse is done starting in the Bugaboos and then ending in Rogers Pass. But for snow safety concerns with the speed and time the team would be reaching certain slopes, the opposite was done. They called it the Reverse Traverse. Fuelled with samosas, cheese, meat sticks and gels, the team made the journey in just 53.3 hours, almost halving the previous record of 80 hours set in 2005. 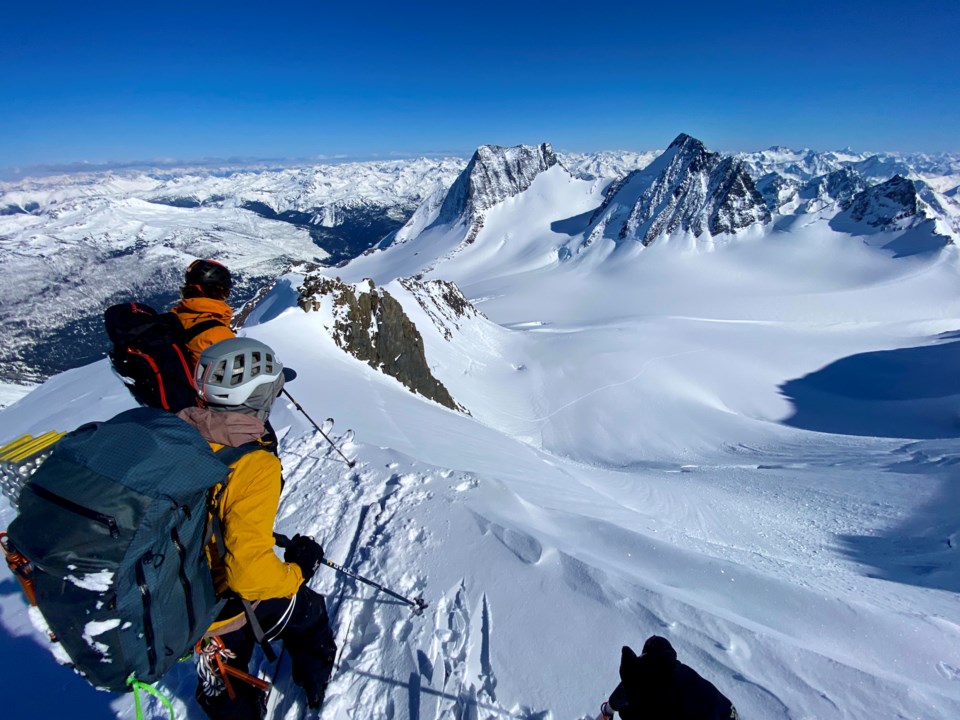 Looking into the Ducan Beaver. By Andrew McNab

“Conditions were perfect and we had the ability to stay in the high alpine the whole time,” Hill tells us. “It was never too hot and just conditions lined up. Absolutely perfect. Midway through, I was watching Andrew boot pack up his 45 degrees slope and I was just thinking, 'God, this is so perfect,' but I don't even want to speak it out loud because I don't want to curse it. Everything was so incredible. Overall, these were some of the best days I've ever had in the mountains.”

However, in the end, although they think it could be done faster, it was about finishing as a team.

“It’s our ego that was fixed on completing the traverse in a certain time, which is the selfish aspect of mountain adventures,” says McNab. “The reward of completing adventures as a team is more powerful than feeding one's ego with arbitrary numbers. We are stronger as a community than as individuals.” 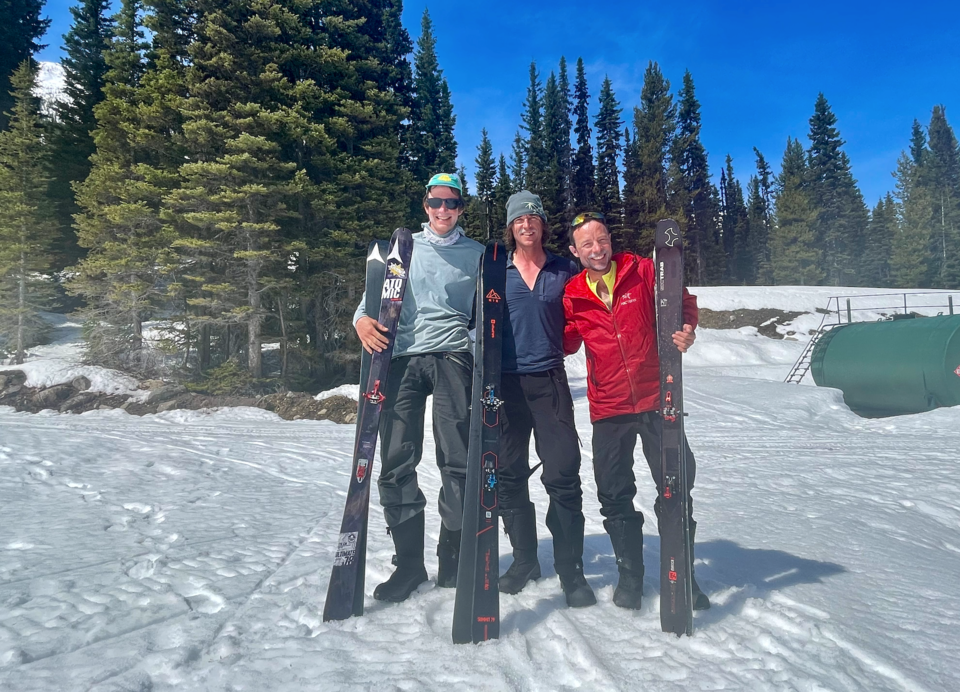