There are various working dogs around the world.

Whether they are searching for people, bombs or truffles – most of them are employed for their excellent sniffers.

“We actually don't know how good their noses are,” says Richard “Kit” Huffer, a lieutenant with Canmore Fire-Rescue and the paramedic and canine handler, said. “It's impossible to judge. There are some estimates from hundreds of times better than a human to tens of thousands of times better than a human. What we do know is that 40 per cent of a dog's brain processes scent.”

To put this into perspective, Huffer uses an interesting analogy.

“Whereas a couple would walk into a room or walk into a restaurant and one would say, ‘I remember this restaurant. We were here on our honeymoon.’ A dog will walk into a place and go, ‘Hmm, I can smell that pizza. It's made with Roma tomatoes. They were picked two months ago from the south side of the vineyard.’” 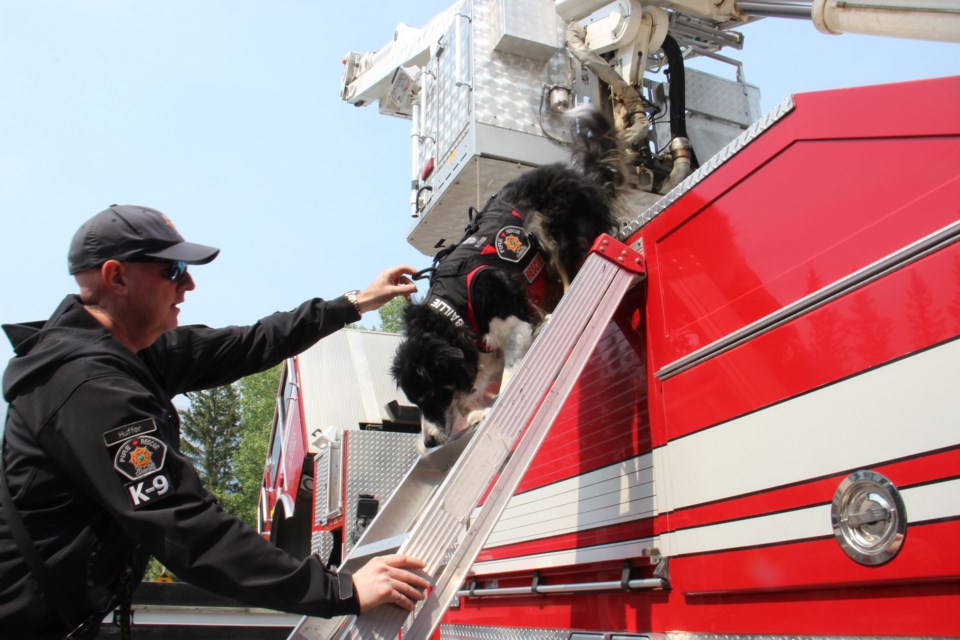 Richard “Kit” Huffer and Baillie descending a ladder. By 51° North
Huffer and his canine partner Baillie  (who can tell you where your tomatoes are from and then some) are members of the Canmore Fire Department and the Canada Task Force.
“There's about 20 federally certified disaster dogs like Baillie across Canada. Most of them are aligned to the six major federal disaster response teams,” Huffer  said. “She is one of four dogs that we have locally on Canada Task Force 2, based out of Calgary.”

Disaster dogs came into their own in the the 1970s and 1980s, following big earthquakes in Italy.

“At first they used some police dogs, the big German shepherds and Belgian shepherds, (Malinois),” says Huffer. “It sort of grew from there, then FEMA (Federal Emergency Management Agency) took over in the late 80s, early 90s. Now all major disaster response teams across the globe have dogs. Nothing can beat a dog for finding people.”

Baillie is highly trained and efficient in finding people. She is a “non-discriminating airscenter” and essentially, has a marking function. 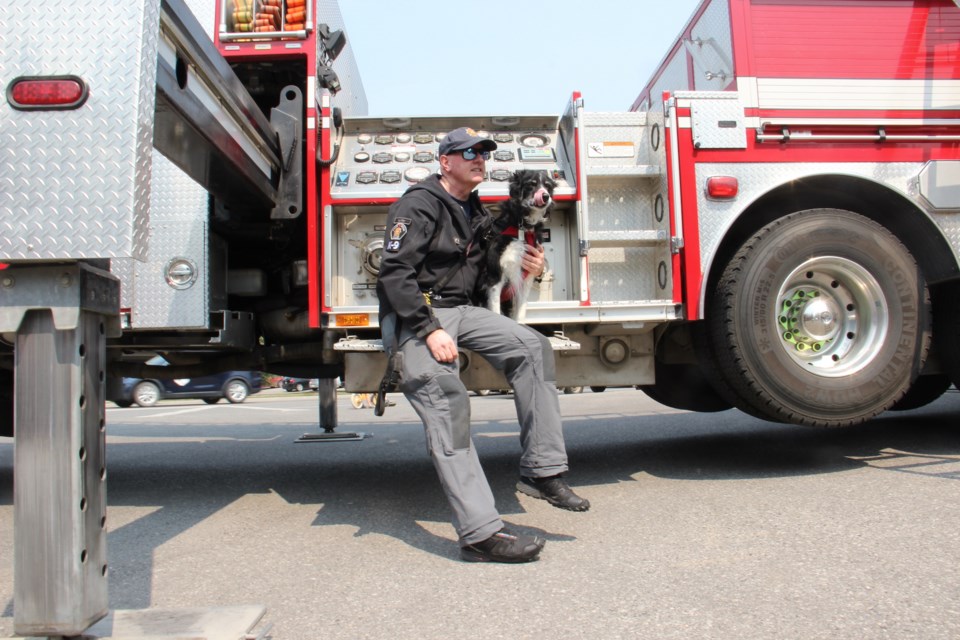 Richard “Kit” Huffer and Baillie descending a ladder. By 51° North

“Example, if there are 15 people when it collapses and there are 15 different individual people trapped, Baillie will go to the first strongest scent and she'll bark,'' explains Huffer. “That's how she notifies me that she's found somebody. And then I will say, ‘find another one,’ she will immediately isolate that scent, ignore it and go onto the next one. She will work her way through all 15 of the scents.”

Besides being able to ascend and descend ladders, Baillie is also trained to do something very unique that not many disaster dogs do – she delivers.

“If you are an asthmatic and you're stuck inside a cavity, we can get Baillie down into you, when we can't get people in there yet,” says Huffer. “I can attach a puffer or inhaler or radio or a bottle of water or whatever, she will take it down and lay down next to you and wait for you to take it off her harness. That's something that hasn't really been done as far as we know, since the first world war, when they were using dogs to deliver medication in the trenches.”

Although Baillie is constantly working on her skills while training with Huffer, she has only been deployed 10 times. However, she was first on the scene locally for the flood of 2013 and the gas explosion.

“In 2016 when the big gas explosion happened, 16 houses were badly damaged and seven of those houses were too damaged for us to put firefighters in to make sure there was nobody inside,” says Huffer. “Baillie went in. She's also been used to clear some of the coal mines when the kids break into them, before they are sealed up again and has done a lot of ground searches for missing people in the mountains around Canmore.”