Buddy Wesley and The Whyte Museum of the Canadian Rockies team up for six part series on the 'Indigenous Ties to the People, Land and History in Banff.'
May 26, 2021 6:16 PM By: Tammy Rollie

Museum staff in Banff is teaming up with a Morley cultural advisor to bridge the gap between cultures.

Nakoda historian and language instructor Buddy Wesley is teaching the basics of the Stoney Nakoda language by incorporating photographs and regalia from the Whyte Museum of the Canadian Rockies in six online Zoom classes.

In Stoney Language Basics: Indigenous ties to the people, land and history in Banff, Wesley will discuss the history and importance of Banff to the Stoney Nakoda people, as well as introduce language basics such as sounds and short phrases.

“The Stoney Nakoda language is probably the most complex and complicated languages in the area,” said Wesley. “It’s quite difficult to learn.”

Wesley – a Chiniki band member, Stoney Nakoda cultural advisor and tribal historian who’s worked with Dakoda, Lakoda and Nakoda language groups across the prairies – said the language is very different from English, even in the way it’s spoken. 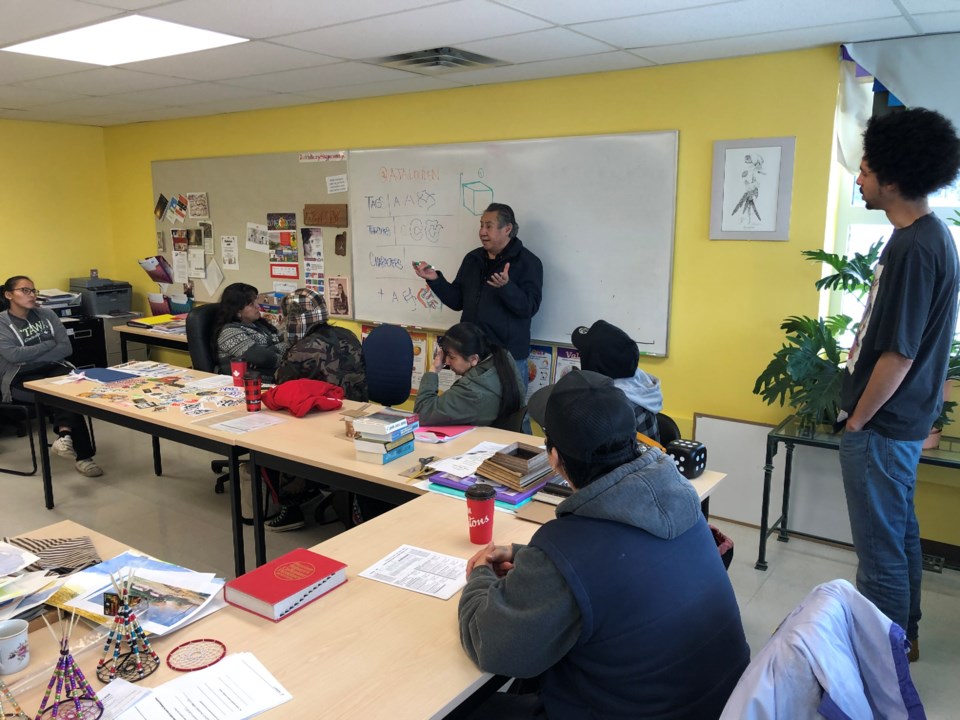 “The sounding is totally different,” he said, adding some words are spoken using a raspy or nasal tone. “It’s hard for people to get it, but once you get it, it becomes easier.”

In addition to teaching language basics, Wesley will talk about the culture of the Stoney Nakoda people.

“We call ourselves the people of the land,” he said. “It’s important to know the etiquette of my culture and it’s very important to put it out there.”

While many other cultures follow a 365-day calendar year, Stoney Nakoda people keep track of time using 13 moons, with a different name for each, Wesley said.

“Right now, according to our system, it’s the moon when the vegetation comes out,” he said. “We pay close attention to Mother Nature.”

Wesley said he’s been offering education about his culture to people in the Bow Valley in partnership with Dawn Saunders Dahl since she initiated National Indigenous Peoples Day in Canmore in 2018 while working for The Town of Canmore in the arts and events department.

In addition to discussing cultural events and issues, Wesley suggested teaching the language and culture of the Stoney Nakoda.

“We’ve learned the white language and then I told her, maybe it’s about time that the white people started learning our language,” he said. “It’s gearing up in hopes that one day there will be a total communication with my people, and I think it’s a start to other cultures learning the language and the culture and the ways of my people.”

Saunders Dahl, now manager of Indigenous relationships and programs at the Whyte Museum, said the online classes will help to build friendships and bridge the gap between the Stoney Nakoda people and others living in the Bow Valley.

“I see this course as a way to open that door to keep that conversation going so that people understand that long-standing history with the museum and our founders, specifically with Stoney Nakoda,” she said.

Dahl, who is of Métis ancestry, has worked with the Indigenous community in Alberta through the arts for 10 years.

The cost to attend Stoney Language Basics costs $215. People can register at www.whyte.org/tickets?fbclid=IwAR2r2jbTXT9ZXvma6Q--JhbXCBQcD6l1RYuXv2x_THzqIzHhKc7xLK54Wno