The city of Coquitlam is putting up fences in the area of Tahsis and Ozada avenues to stop unsanctioned trails from being used, and to prevent vandalism around Maple Creek.
Apr 6, 2021 9:30 AM By: Janis Cleugh 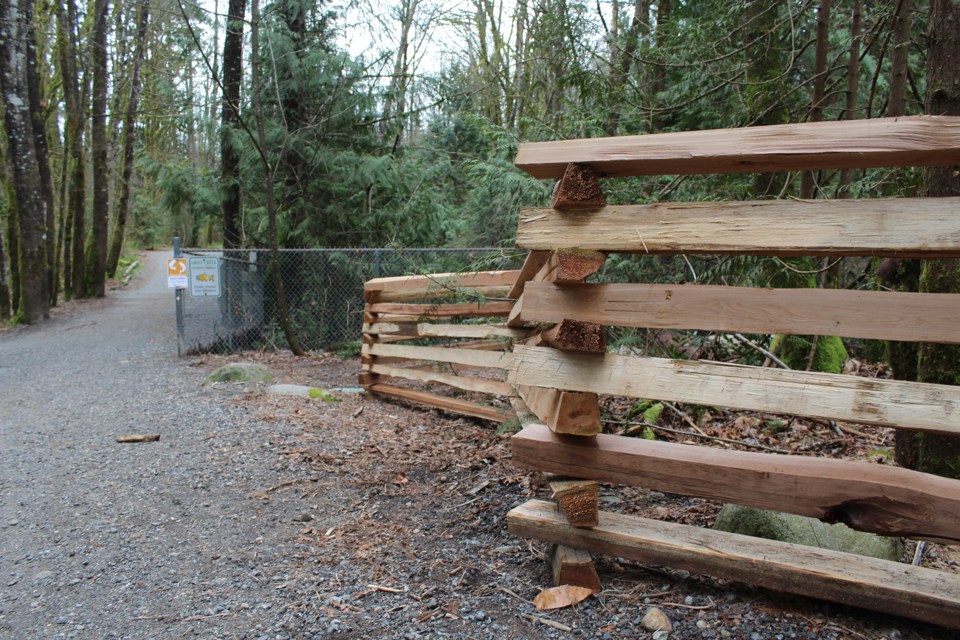 Adult mountain biking enthusiasts are being blamed for killing about 4,000 juvenile salmon in a Coquitlam watershed.

Now, the city is putting up fences in the area of Tahsis and Ozada avenues to stop unsanctioned trails from being used, and to prevent vandalism around Maple Creek — a tributary of the Coquitlam River.

Sandy Budd, president of the Maple Creek Streamkeepers, told the Tri-City News that her volunteer stewards, as well as federal staff with Fisheries and Oceans Canada, have been on site daily — for nearly two months — to educate hikers and cyclists about the sensitive habitat, and to inform them about the recent destruction.

“It’s really serious,” she said. “It’s ruining the area, and we’ve lots about 4,000 fingerlings because there’s been no water in the pond. It’s been running low, or dry.”

Mountain cyclists, claimed Budd, have used chainsaws to cut trees and branches to make jumps over the area streams; however, they’ve also plugged the water flow from Maple Creek into the pond, which is located directly east of the fire hydrant where the two streets intersect.

The off-channel pond is where fingerlings (juvenile fish) are released by the streamkeepers twice a year — usually with help of students at the nearby Maple Creek middle school — as well as by federal fisheries officials, she said.

But the sandbags, boulders and other debris that the cyclists have used have increased in volume recently; vandals are also tearing down the signage and throwing them into the pond.

Erin Gorby, Coquitlam’s manager of urban forestry and parks services, told the Tri-City News that the outflow culvert that goes into the pond has been “repeatedly filled with rocks and sandbags” since January.

She did not point the finger at the mountain bikers, saying that no one has been caught; however, she believes the split-rail cedar fencing now being installed will help prevent further access and damage.

Under the city’s parks and community facilities rules and regulations bylaw, violators can face fines of up to $250 for “deposit of off-site refuse and prohibited activities.”

She added, “The activities we are seeing in this area may also be subject to fines under Fisheries and Oceans Canada as they impact fish and fish habitat.”

• Residents who see damage or vandalism in Coquitlam parks and forested areas are asked to call the parks customer service hotline at 604-927-6300.