“The key is really to get ahead of that and right that behaviour so they don’t get overly habituated,” said Dan Rafla, a human-wildlife management specialist with Banff National Park.
Jun 18, 2021 9:04 PM By: Cathy Ellis 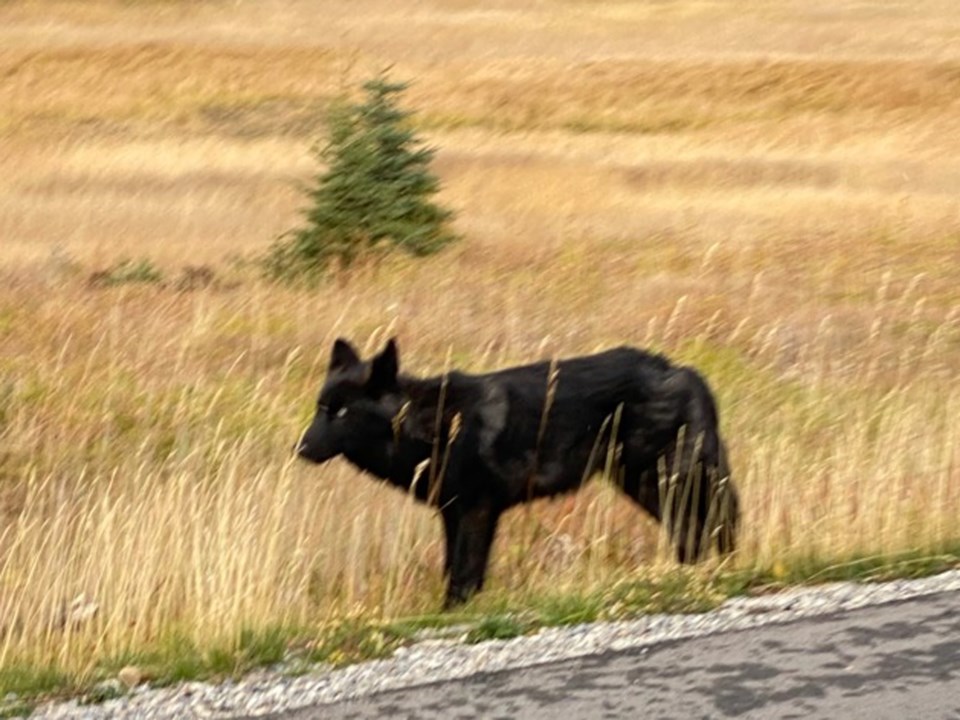 BANFF – Keeping the wild in wolves can be a tough job in the busy and developed Bow Valley.

But wildlife experts in Banff National Park are trying to do just that, having fitted two young black-coloured members of the Bow Valley wolf pack with tracking collars on June 5 after they showed “some behaviour of mild concern.”

Parks Canada wildlife specialists say there were a couple of reports of these two yearlings following or getting within mere metres of vehicles, a worrying signal that they are starting to lose their wariness of people.

“The key is really to get ahead of that and right that behaviour so they don’t get overly habituated,” said Dan Rafla, a human-wildlife management specialist with Banff National Park.

“We’ve seen in the past what the risk is if they get habituated to vehicles, or people, and lose their wariness ... they might be prone to getting fed or approaching people or getting into food attractants.”

In 2016, two female members of the Bow Valley pack, including the breeding female, were killed for public safety reasons after they became accustomed to people, boldly entering busy campgrounds and day-use areas to get food.

The current breeding female of the pack, known as 1701, is the only remaining member of that former decimated pack. The former alpha male 1901 was killed on the Trans-Canada Highway near Banff in spring 2020.

Wolves are resilient, and if conditions are right, they have been able to bounce back to healthy numbers, so wildlife experts are hopeful the breeding female has produced pups again this year.

“We haven’t seen any, but based on the behaviour of the other wolves, their main focus is probably attending to the pups.”

Remote camera imagery in April indicated the breeding female may have been pregnant.

“She was looking fairly rotund around the belly, and since then, remote cameras are showing her belly quite diminished,” Rafla said. “There is also some evidence of potential lactating.”

Wolves in Alberta breed between late February and early March, with the gestation period being around 60 days. When born in the den in late April through May, the pups weigh about half a kilogram.

Pup mortality can be high, often as much as 50 per cent, but it can go up even higher. The Bow Valley’s pups have often faced the additional pressure of the deadly Trans-Canada Highway and Canadian Pacific Railway.

Adults in the pack will transport meat from a kill in their stomachs and regurgitate it for the pups to eat. After the first few weeks of the mother’s nursing, the pups become the responsibility of the whole pack, while wolves lower in the pack hierarchy may act as babysitters.

“Time will tell if she’s had pups,” Rafla said.

As for the young collared wolves – a female and a male – Rafla said it’s also important to note they are essentially like the teenagers of the family.

“They are more liable to get into potential trouble and explore the landscape as they are testing their boundaries,” he said, noting wolves are social by nature.

“But wolves being incredibly intelligent can quickly go from relatively habituated to displaying very negative behaviour, so we have to get ahead of it quite quickly.”

Having collars on the wolves means the wildlife officer knows if the animals are frequenting developed areas, like roadside, day-use areas or campgrounds.

Rafla said there is no plan at this stage for a dedicated aversive conditioning program on the wolves, but they will be able to haze them away from busy areas.

“There is evidence these wolves in the Bow Valley can coexist with people, but sometimes we need to intercede early and that’s what we’re doing here,” Rafla said.

“We haven’t seen any undesirable behaviour with the other pack members, which is great.”

The two yearlings were captured and immobilized on the evening of June 5.  One was fitted with a conventional VHF collar and the other with both a VHF and GPS tracking collar.

Typically, the standard practice for capturing wolves, particularly in winter, is darting them from a helicopter. Following some patrols, wildlife experts were able to free-range dart the animals.

Parks unsuccessfully tried to collar a couple of members of the pack over winter, but jumped at the chance to collar these two young wolves when they started “demonstrating some behaviour of concern.”

“We want to get ahead of that behaviour of concern and sort of right it so the animals become a bit more wary – it’s a benefit for both public safety and the wolves themselves in this case.”

Parks Canada is also trying to keep these wolves wild in the event they disperse from their natal range to outside the protected areas of Banff National Park in search a new territory or a mate, which can occur anywhere from one-and-a-half to three years of age.

In Alberta, wolves are subject to trapping and hunting pressures, and are also killed as part of the provincial government’s management of some caribou herds.

A recent study showed the risk of wolves dying was 6.7 times higher when they left Banff’s boundaries, peaking during the hunting and trapping seasons, which don’t have bag limits, or quotas.

“They may leave the park where they encounter different obstacles,” Rafla said.

One of the yearling wolves that has been collared is the same wolf that was injured in the Lake Minnewanka area in mid-October 2020, resulting in a permanent injury to one of his rear legs.

It was thought at the time the wolf was either hurt in a vehicle collision, although none was reported to Parks Canada, or potentially getting too close to bull elk during the fall rut.

Regardless, he survived with the help of his pack mates for the past nine months, but Parks Canada is worried visitors may be concerned about his injury and be tempted to get close or feed him.

“He survived for almost nine months with that injury and hopefully will continue to survive,” Rafla said.

“If people do see this wolf, under no circumstances should they intervene.”

A wolf pack may cover a distance of more than 100 kilometres in a single day and can have a large home range territory of 100 to 500 square kilometres.

“We can have success in coexistence, but one of the key aspects is making sure that wolves are able to navigate the landscape without unnecessary conflicts and being able to maintain their wariness around people,” Rafla said.

Parks Canada asks that any inappropriate behaviour from people, like feeding or getting too close to wildlife, or wolf sightings, be reported immediately to Banff dispatch at 403-762-1470.

“It can’t be stressed enough that reporting wolf observations in the park is extremely helpful for our management and keeping them alive and well,” Rafla said.

About the Author: Cathy Ellis