The Boss beats the heat in Banff

As people seek to escape the heat, grizzly bear 122 did much the same thing, cooling off in Johnston Creek as the temperature soared into the 30s.
Jul 3, 2021 8:23 PM By: Cathy Ellis 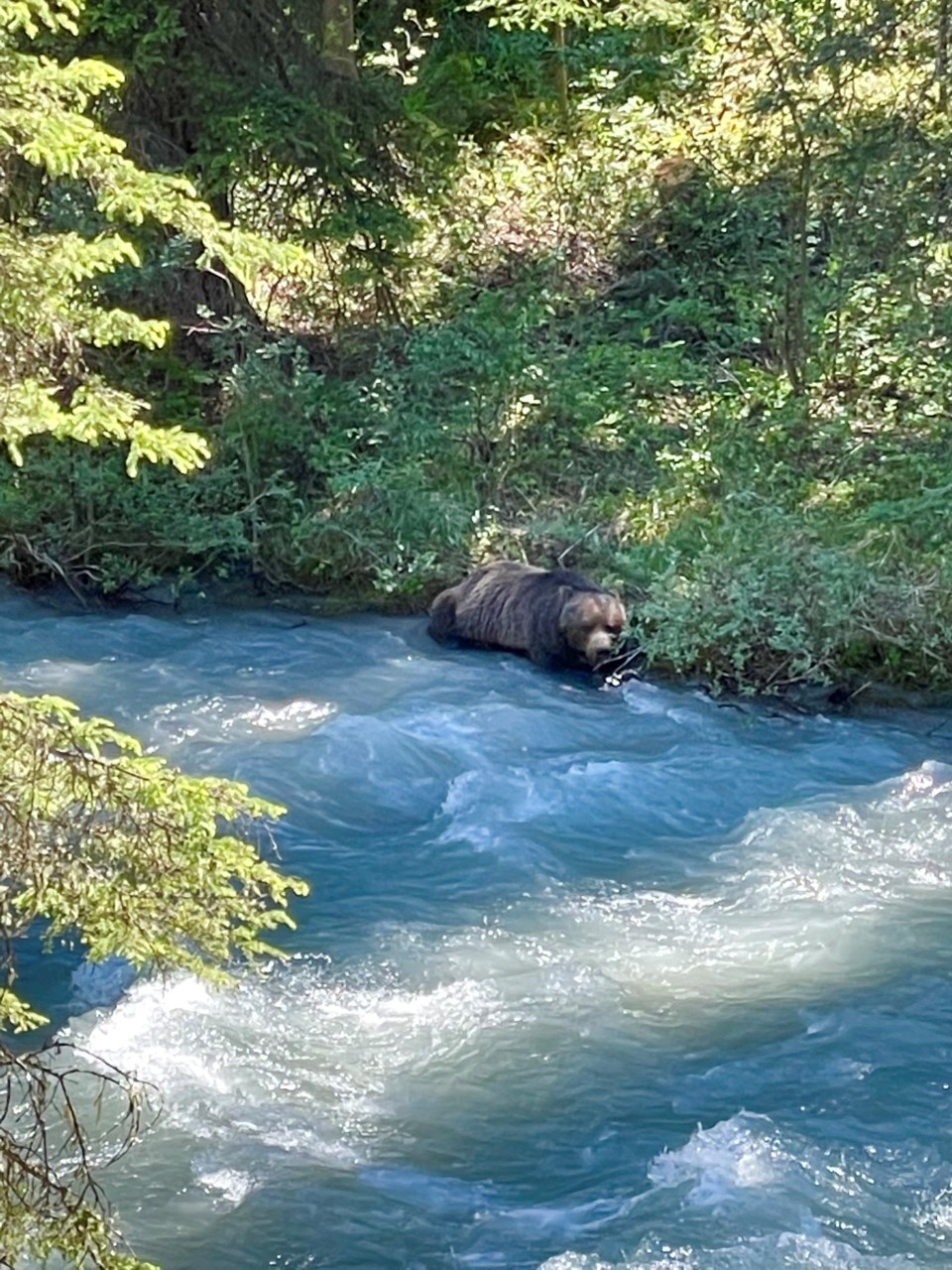 Grizzly bear 122, also dubbed The Boss, was seen cooling off in the frigid fast-flowing waters of Johnston Canyon as the mercury hit a record-high 33 Celsius in Banff on Sunday (June 27). Photo courtesy of Tim Nokes

BANFF – Even bears need to beat the heat as summer temperatures soar in Banff National Park.

As Albertans swelter under a record-breaking heat wave, infamous grizzly bear 122, also dubbed The Boss, was seen cooling off in the frigid fast-flowing waters of Johnston Canyon as the mercury hit a record-high 33 Celsius in Banff on Sunday (June 27).

“The Boss lumbered down and literally just sat in the creek for about 20 minutes and rested his head on the bank,” said Tim Nokes, owner of Johnston Canyon Lodge & Bungalows, who took the video.

“I think it would take a lot for the heat to dissipate through all that fur, so he just laid there like he was in a spa getting a treatment,” he added.

“The creek is still glacial water and is bloody cold, so I think it was very refreshing for him and that 20 minutes would have helped cool down his body’s core temperature.”

A small crowd gathered on the bank on the west side of Johnston Canyon by the ice cream shack to watch The Boss across the creek.

Nokes encouraged the visitors to move up to the trail so they didn’t create a human fence in case Bear 122 needed to move on.

“Watching him rest his head on the bank, I could actually feel how that must have felt after he’d been walking through the forest on a a 30-plus C day,” he said.

“He had a pretty good belly so I think he might have just feasted on something, too, which would also make him more uncomfortably hot,” he added.

“I was really impressed that he just knew instinctively to go lay in the creek to cool off.”

When The Boss first trudged along around noon on Sunday (June 27), Nokes thought the patriarch of the Bow Valley bear world might have been in distress or suffering from heat exhaustion.

“I thought he was just going to get a drink,” he said, adding the cool down seemed to help Bear 122 get a reprieve from the blazing midday sun.

After his splash, The Boss meandered off towards Moose Meadows to seek some shade.

“I’ve never seen something like that in my life,” said, Nokes, 59, whose family has owned the resort at Johnston Canyon for decades.

In Banff, the mercury soared to d 36.6 C on Monday (June 28), reached 37.8 C on Tuesday and Environment Canada was predicting a high of 35 on Wednesday, with the heat wave continuing into the weekend.

Though cooler, Environment Canada indicates Banff will see a high of 33 on Thursday,  27 Friday, and 27 Saturday, before cooling off Sunday.  The normal temperature for this time of year is 20C.

On the same day The Boss took his refreshing dip, a B.C man captured a mama bear and two cubs seeking refuge in his family’s Coquitlam backyard pool as temperatures soared to a blistering 46 C – which made headlines around the world.

This week at the Calgary Zoo, the three black bears and two grizzly bears, including 34-year-old Skoki, who was moved to the zoo from the wilds of Banff National Park in June 1996, have been keeping cool in the pools in both exhibits.

Colleen Baird, manager of animal care at the Calgary Zoo, said staff are paying special attention to the older grizzly bears, which she refers to as geriatric, in this record-breaking heat wave.

“We have pools in both exhibits, in their habitat, and they just sit and soak,” she said.

“The black bears have a tree and sometimes they will go up in the tree and they’ll have a little snooze and they’ll come back down.”

Baird said the bears are also getting foods like lettuce, cucumbers and celery.

“They don’t want to eat a whole bunch anyway, so we want them to eat stuff that is moist and wet,” she said.

“If they’re not super hungry we’re okay with that, but we do pass by that exhibit a little bit more in this hot weather.”

In addition, staff are tossing food into the pools to encourage the bears to get wet and cool down.

“We will put fish in the water and they need to go into the water to go get it,” said Baird.

About the Author: Cathy Ellis